NOTICE: REGARDING THE SPRITE DISCOVERY THREAD

Since it's happened quite a lot, it needs a PSA here: Do NOT edit our sprites (Gen 6+, Megas, and fakemon) to show off an example for your idea of colors without asking for permission first! This should be fairly common knowledge, but given how often its happened, its now an official PSA on this thread. Consider this fair warning since its posted in three places now.
This thread is going to be for the requesting and review of sprite permission, and the records of who is allowed permission to use Pokéfarm sprites. We had a version of this on PF1, but it has not been carried over. Users are encouraged to ask for permission here, and not message a member of staff. When given permission to use sprites for editing purposes, you simply need to credit the site--- for example: Mega Mightyena Q (c) Pokéfarm Q, recolored by me. Any edits made to a PFQ sprite -- megas or Gen 6 -- must be asked on a case-by-case basis for permission. We don't grant "blanket" permission. Also, if we find that a PFQ sprite has been edited by a user without asking permission first, then asks for permission, it's not okay. Permission to use the edited sprite will be denied, and if it is found still being used, action may be taken on the account. If you make said sprite for a user you should include that you have permission to edit the sprite, they just need to credit it appropriately like mentioned above; Mega Mightyena Q (c) PFQ, edited by <your username> with [Permission] <- would normally include a screenshot of permission given. With that out of the way, below can be found the official list of those permitted to use PFQ exclusive sprites. I'll provide an example forum below should you wish to use it - you dont have to, but it might help some of you. ^^
Art by Sei 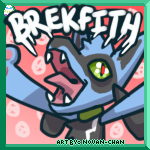 Hi my name is Sei my favorite color is clear
Interested in using a Pokefarm-made sprite? Click here to get permission!

NOTICE: IN THE EVENT OF A NAME CHANGE

I need the one I've boxed in - the second one. :) YOUR REQUESTS WILL BE REJECTED IF THEY DO NOT USE THIS FORMAT. This is because I NEED THE SECOND pfq.me link! An example of a filled out forum would look like this: Hello, Sei! I would like to use a sprite made by PFQ: My pfq.link: [url]https://pfq.link/@s[/url] Sprite(s): Noivern Usage: Recolor Who's making the sprite: AlyssaNights in her [url=URLHERE]shop[/url] Thank you! 👍 0
Posted 20/Jan/2016 14:35:40 (4 years ago)
Ok, my bad, sorry for that, I read the whole thread and missed anything relating to the blanket permission thing. I'll know better when the time for making said sprites comes and I ask permission for them. And thanks for the correction.
Larvitini sprite created at my request by Enderdraconian7799 on fusemon.net before the site died, sprite made 'shiny' by myself and used as my pokesona.