Iales
RULES: Don't Spam No inappropriate scenes Be kind
Avatar drawn by me!

A peculiar stone that prevents a Pokémon from evolving when Held.

👍 1
Posted 11/Jan/2022 00:46:42 (9 days ago)
Midnight stalked over to the cold river to take his daily swim. As he swam, he thought of having his own forest. He couldn't stand living with the human freaks who lived there. He just wished, just wished he could have his own place. A place for others like him. And like his prayers were answered, he heard something happen in the water. Suddenly, a great whirlpool formed, sucking him down into the center. He gulped for air. And soon, he fainted.

👍 1
Posted 11/Jan/2022 00:58:08 (9 days ago)
Midnight awoke in a forest, surrounded by trees everywhere. It was nighttime, he noticed. The place seemed empty. Sure, there were berries and everything like that, but it was still empty. He decided to make a hut to live in and started right away. In about a week, he had finished the project, satisfied with his work. Besides that, he was still lonely. Abby was still on a run from those people, she had been for weeks. She was hungry and thirsty. Make that hangry and thirsty. She was more worried about water and was searching for it. After a while, she came across a stream. She leaped at it, only realizing she was hallucinating. She soon found another and tested if it was real. It was. She leapt in and drank.

👍 1
Posted 11/Jan/2022 22:36:53 (9 days ago)
Abby thought about how she wanted to be somewhere no one else could find her. Suddenly, a great whirlpool sucked her down without her even having a chance to react. Midnight felt a strong gust of wind and a small leaf (oddly blue) appeared. It circled him twice and drifted off. he followed it and was greeted by an albino Umbreon (yay) and a Mudkip. He took a close look at the albino to make sure she was real. "You're just like me!" he said.

👍 0
Posted 18/Jan/2022 20:19:38 (2 days ago)
Edited 18/Jan/2022 22:04:53 (2 days ago)
Eos was in the forest. She looked down at her reflection on the lake,the black of her fur tinted silver-blue in the moonlight. She had always been happier when she was close to water.Maybe it was because her parents had both been Vaporeon.Or maybe it was because the majority of trainers that came to the forest seemed to hate getting wet.Either way,the water made her feel stronger.Free.Safe. She slid into the water,shivering as she splashed about in the freezing lake. Suddenly,she heard a rustling in the bushes.A Pokemon trainer emerged,along with what appeared to be a Shiny Charizard.The trainer pulled a Master Ball from his pocket,preparing to throw it at Eos.She needed to get somewhere safe,fast. Then,as if granting her wish,a whirlpool opened up in the lake and swallowed her whole. Eos woke up,wincing as a burning pain shot through her left leg.It must be broken.Too bad I don’t have any healing moves.She looked up,leaping up in surprise at what she saw.There was a Mudkip,a Pikachu,a Shiny Umbreon(like her!) and....She suppressed a gasp.Standing in front of her was a female Albino Umbreon.She desperately tried to keep her rings from turning an embarrassing shade of pink. She was the most beautiful creature Eos had ever seen. 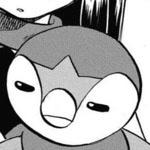 👍 0
Posted 19/Jan/2022 03:20:07 (1 day ago)
Edited 19/Jan/2022 03:24:12 (1 day ago)
Iales leered at the murky abyss lurking below the creaky boat, her eyes trying to detect any movement that may appear in the eerily still water. Her owner, an avid astronomer, was busy with a telescope, paying no mind to the Porygon2’s anxieties. Iales never liked the water, a stark contrast to their master’s seafaring habits. Their distaste was reasonable, their rubber casing could only prevent so much water from leaking in and damaging their internal mechanics. In a second, a flicker of motion catches her eye, rapidly darting towards her. A wet splash muffles a cut off protest as their small body begins to drift down to the depths of the ocean… Iales slowly snaps out of unconsciousness, finding themselves at a muddy riverbank. Her vibrantly painted body, though sullied by the splatters of dark mud scattered about her carapace, stood out from the gloomy atmosphere. She stumbles to her feet (or whatever Porygon2 have) and begins to run a cursory scan of her surroundings. In the distance, she sees a group of Pokémon composed of a Mudkip, a Pikachu, and what she could only assume to be three Umbreons. Unable to suppress their curiousity, she begins to approach the group…