Welcome to my little trashcan

Hi I'm Ren, my first post was trash so I pasted it below replacing a useless post. Most of the stuff about me is in, well, my About Me, so you should probably check there for worthwhile info. If you want actual journal-type posts, start at page 3! If you want posts in a crappost style, go to page 7!

👍 1
Posted 20/Jul/2018 23:46:30 (2 years ago)
Edited 02/Mar/2020 17:06:07 (5 months ago)
Hey, it's Ren, and I'm back with another writing dump! This one is the end of a book that I never really finished. It's sorta messy, but that's probably the case for most of these. Enjoy at your own risk ;DD (P.S. it took me a while to find this so I suffered for you) I looked at their astonished faces as I let out a strange sound that could only be described as a mixture between a growl and a chirp. I took to the sky, tears streaming down my face. It was hard to let go of my family and friends, but they'd be safer if I left them and drew away the threat. Even through all the pain, I still managed to catch a glimmer of hope. For the first time in my life, I finally felt like impossible was not an option. I was perfectly fine with that. =E ==N ===D ________ `~`~`~`~ ________ There you go, have fun interpreting that somewhat sad ending.

👍 1
Posted 21/Jul/2018 18:17:07 (2 years ago)
Edited 02/Mar/2020 17:06:15 (5 months ago)
Hey again it's your favorite child, and nobody looks at this crap but I don't care. This is gonna be a random non dump post for random crap. Letsagoooooooo I have some weird OCs, such as a family of Pokémon OC sisters that are based off the 4 main types (Water, Fire, Grass, Electric) and a few subtypes (Flying, Dark, Psychic, Fairy), a female lion kitsune named Ari who I use as a sorta inside joke, and a child that looks like a bluejay who's only genderless because they forgot their gender and they refuse to look down their pants to find out. I occasionally hug PokéSpe manga to sleep and consider the characters/volumes my children. Heck, heck, heck your fricks, gently frick them all, frickity frickity heckity frickity, heck and frick you all MOM WHERE DID YOU PUT MY SIGGY Flexray Farceus Falkia Fialga Firintina Fiogre Froudon Frayquaza (F Pokémon created by LeapingRiolu)

👍 1
Posted 22/Jul/2018 16:23:02 (2 years ago)
Edited 02/Mar/2020 17:06:24 (5 months ago)
Hey it's your best worst girl Ren here with a dream I had that I thought would be worth sharing so enjoy the weird dream So it started with me in the family car, and my mom was apparently driving us to our new house because we were moving. Somehow on the way up the long as all frick driveway to it, I lost my shirt on a rock (???) so when we finally pulled in I had to walk down, get my shirt, and put it back on. After finding my shirt I found a man around the area. I awkwardly put my shirt back on and walked back as the man's car drove up the driveway. It turns out this man and another man were our movers, and they were really nice. It turned out they had even included a NES with our house (It looked like a PS4) and some sort of new Pokémon game with it called Pokémon Indigo (it was mentioned that the counterpart to this was Magenta) and even predecorated the rooms of the house. Hearing this, I went to look for the room with the NES/PS4/Pokémon game. I found a hall and 6 rooms instead, so I decided to claim one of these since they were fairly big. The movers had decorated them partially and all of them were themed, weirdly enough the themed and decorated areas were where my bed would go. There was a prehistoric room, a space room, a diamond room (or jewlery shop room), a cave room, a jungle room, a white posh/modern room, and a cottage room. I chose the diamond room, and I started to make it mine. I put a crystal I had found in the cave room with the other diamonds (which were in a rectangle cavity in the wall) and it made the whole room have rainbows all over it. It was actually really cool. My mom eventually called me out for dinner. Walking down the hall for a while, I started to hear music. The music was a mixture of the Pokémon White2 theme and the Earthbound/Mother 2 theme. I started getting excited because hey, I love both those games! After making it into the hall and catching a glimpse of some Pokémon/Earthbound hybrid game being played by my brothers, a loud as frick boom of thunder woke me up and sent me almost falling off my mattress. I was sad when I woke up I really wanted to play that game

This is one of the things I came here to do. Also, to share an OC in the making. Give your opinion in the new poll that nobody will take heck nobody even reads this anyways so this is why I'm even posting

So, this is Beryl. 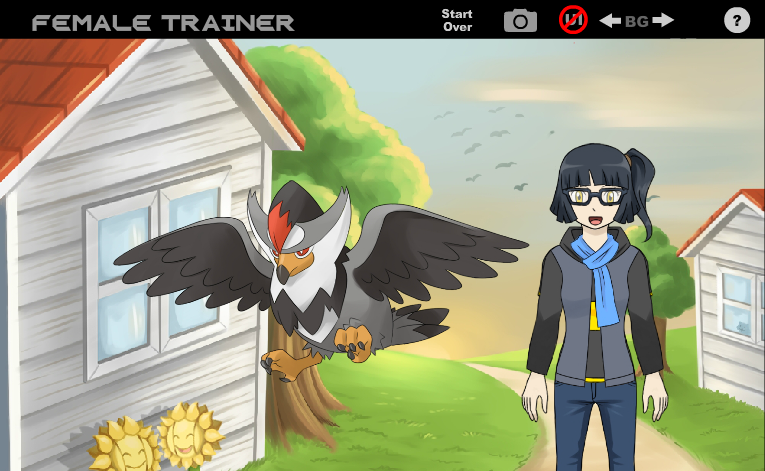 Not really got much info on her yet. She's a PokeSpe OC per usual though. So yeah, Beryl.

Template made by Kamilejszon; Pokemon (c) Nintendo; GIF from willfosho.tumblr.com
Cough i broke it

Here the template is without being butchered up by me