👍 0
Posted 01/Sep/2021 19:01:21 (21 days ago)
Edited 01/Sep/2021 19:03:36 (21 days ago)
i like the new chimchar melans sort of better but i think that’s only because the contrast is better now. i preferred the old color scheme but for the new one, i can actually tell what’s what when i’m on low brightness lol. the only issue i have is with the bright purple mask. it looks like a blob but maybe it’s supposed to look like that and i’m just remembering wrong. i also feel like it shouldn’t also be purple if the body is purple and they’re opposite colors in both the normal and shiny sprites? but maybe it was based off the albino coloring… as for roserade. i’m glad the colors were sort of kept because this coloring reminds me of tuxedo mask and i love it. but melan budew looks much better now and that’s all i really care about. monferno and roserade are melans i have tried or planned to hunt so i’m glad they improved

icon drawn by me.

👍 0
Posted 04/Sep/2021 08:26:27 (19 days ago)
I LOVE the new Infernape melan, yay more purple melans!!! Also, the new tourney mon is so cute, why has it taken so long to get a possum Pokemon (seriously, are there any canon ones? I can think of hedgehogs, but not possums)
Shinies & Albinos UFT in my Trade Shop! Please PM or post in my shop. Random trades will be automatically declined ---------- Avatar credits: Minior GIF bait made by ValleryP

👍 0
Posted 05/Sep/2021 18:48:34 (17 days ago)
I'm late on this but I love Melan Gible's line update, I wasn't too big of a fan of Gible's Melan and it's wild how much difference making it a few shades darker does and adoring Garchomp even more now! Also Possmol line is just so precious, very unique Exclusive and I love all the thought that got put into it 😭
collecting: 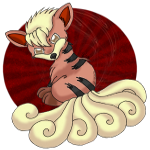 -snip info about shinorin- but yeeeah This Tourney was double Mythicals. Both in some way being part fire typing but far different from one another. big 'Huh' moment. Perosnally thogh, I'm simply happy of the new bois so Bunbori isn't alone... ...Bunbori is still the best though \o/
BUT in this post Niet said that Lunamore was the second mythical.

Apocalyptic Growlithe Pic|Avi by Me

Avatar made by ME on this site