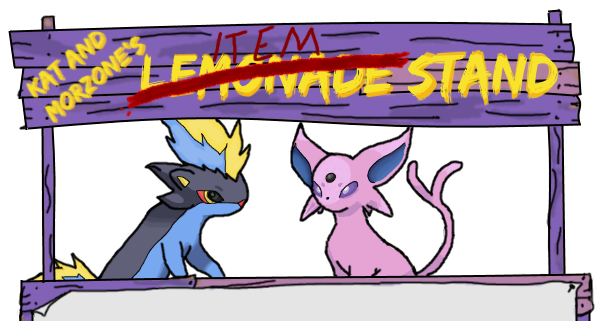 Welcome to the Item Stand!

Totally not a cult!

You're walking along a small road, surrounded by heat and dust. There doesn't appear to be anywhere to stop at even though you're desperately thirsty. You round a bend and there, behind a cluster of willow trees, is a little booth. It's fashioned haphazardly out of mismatched planks and boards and is shaded by a large, fabric beach umbrella. Two tired looking Pokémon are sitting behind the counter, an Espeon with a black gem on her forehead and a Quilava whose paws appear to be sparking with electricity. You approach carefully, wondering if they're selling something cold to drink. The Quilava looks up and smiles. "Well, hey there! Welcome to Kat and Morzone's Lemonade Stand! The only lemonade for miles," he says. The Espeon cuts him off before he can say anything else. "We also sell other stuff! Like lots of food items! Berries and gummies and-" "Well," says the Quilava, "We're actually out of lemonade because SOMEONE drank it all." He looks pointedly at the Espeon. She flattens her ears disagreeably, but doesn't actually seem too bothered. "Well excuse me," she huffs, "I wouldn't have been so thirsty if you would keep your fire under control." "Well, sor-RY! I can't help it! I'm a Fire Type, I run hot!" The Espeon glances back at you, somewhat embarrassed. "Well, uh... we also sell other things. I have some more items and things for sale, in fact, I have a whole adoption program, if you're looking to adopt some Pokémon. And, um, Morzone has some stuff too!" The Quilava cuts in. "I had this box of summons that was just sort of gathering dust, so I thought 'why not?' and...er...yeah, they're for sale too." says the Quilava. "There are also some rare-ish Pokémon who are in need of homes," says the Espeon, "But Morzone mostly deals with those." You timidly ask about a cold drink again and the two Pokémon eye each other again, then both begin talking at once. "Well, like I said, we WOULD have lemonade, but-" "I drank it all, but it's HIS fault and-" "Honestly, I drank some too, it really is hot-" "That's okay, we have other things to sell! Like...." Dear Arceus, what have you just started....

A rickety signpost next to the booth has a few rules written on it. It'd be a good idea to read them. 1: Follow all PFQ rules 2: Be polite, no rudeness to anyone. 3: Remember, Kat is still here. She's watching you. Don't try anything silly. 4: If it is something we hunt (Shinies, gems, shelter pokemon, etc.) DO NOT buy it just to turn around and resell it! If it is something like summons then I don't really mind. 5: Always Use the Form!!!!! 6: We reserve the power to refuse any offer. 7: This works on a first come first serve basis, do not try to take something someone else has offered on by offering more. 8: If you want to negotiate a price, do not try and rip The two of us
The password is "No hiding under the rock"
off.

There's a stack of order forms sitting off to the side, looking as if they might all fall and go fluttering off the booth if they were bumped. [b]Hi! I'd like something from the Lemonade stand![/b] [b]I'd like to buy:[/b] [b]I'm going to pay:[/b] [b]Password:[/b] [b]Other:[/b]

I love this shop! It's very cute and well set up~

This shop has a creative uniqueness to it. I enjoyed browsing through this shop because it's full of personality! I did get a bit mixed up when PokecraftCat's portion of the shop came in due to having the same banner, but I feel like the shared shop banner just melds the two together! Overall, I give 4.5/5 Stars.

Shops to check out

Want a link to your shop here? Put one of our banners in your shop!

Made by Ashlyn Sanders 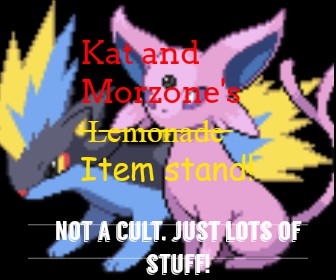 Avatar was created for me, the sprite in the avatar was made by WriterRaven
Breaking News! Aliens at Auction!

Kat and Morzone's Item Stand Totally NOT a Cult!The Lemonade stand
Template made by CatEnergetic

Yeah, so, like I said I sort of had these boxes of stuff gathering dust so I'd figure someone would want them! Though as a general rule, for more common items I'm always going to keep at least one of everything, so keep that in mind when you make an order!

Normal form changers are for sale for 5K credits for 1, 5 GP for 1, or 3 for a box. Special form changers are offer and swap only. Please note that I like to have at least one extra of everything, so only offer if I have 2 or more of something. Though I am open to swaps!

Prices are Per offer. I will double check against market prices so don't try to shortchange me here. Unless you're offering a thunder feather. There's some good leeway in that case. Summons NFT:

thunder feather
(Collected by me.) If you have other items to trade, such as Ice gems, Relics, tournament tokens, Kanto shinies, or something similar, feel free to make an offer.

Prices are Per Megastone Tier, Other offers in summons, boxs, and gems are welcome Tier 1: 250GP, 250K credits, 50Zc,

or 1:1 swap Current hunt types: (these are not for trade) N/A

1.5K credits per 1/ 3 Gp per 2/ 1 Zc for 3 Cookies are double the price.
As a warning, I have a general policy against large scale buying. This is a loose personal policy that is subject to change., but I'm not about to sell all my summons to one person because they can afford all the GP.

This is where I sell/trade all the various pokemon I have! I have set prices, but if you have something I want that isn't listed, feel free to make an offer!

Prices are per shiny

Prices are per Albino

I have all exclusives available, though not all tournament fakemon.

I will breed exclusives for you! As I said above, I have all exclusives available. I will take up to 5 orders at once, but won't breed more than 10 per order. I also don't take berry/nature preferences, sorry!

So I have a bunch of shinies, megas, and a few albinos I'd be willing to dex trade to other people. I do have a few special rules for this section I need to put up though.

DO NOT STEAL MY POKEMON, they are to be sent back ASAP Do not rename, evolve, change form, or take the item of ANY of my pokemon Please don't go offline when dex trading.

Hello! This is where I perform services for you such as gem hunts! It's small right now, but new services will be added in the future.

Ever wanted your pokemon's story told? Well now you can! This service, based off of Kat's, involves me writing up your pokemon's custom story with any elements you wish! Whether its just their life story or maybe you want to tell a grand adventure they went on, it's all good! Stories will be written in the pokemon's "custom description" box. IMPORTANT! After I accept the custom story, we will take things to PMs to flesh out any last details of you pokemon's story. Prices: free! Let's do this.

So you know how it takes time for you to recharge those shiny charms, and how expensive it can get? Well here's your solution! You will Trade to me:

any medium gem
Or

+ 30gp And I will trade to you a fully charged, ready to go Shiny charm, instantly ready to be used! Please note I only have so many shiny charms, so occasionally I may not have enough charged ones to cover orders. I will try to keep stocked as much as possible. This service will be closed during hunting time.

Gym Where the Stars Collide~ 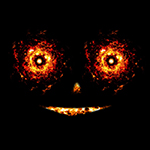 Avatar made by The-Winged-Tiger on Deviantart as a birthday gift. Signature banners made by Lunar Latias and Neo Emolga respectively with permission here and here.