👍 1
Posted 24/Jun/2020 13:53:17 (7 months ago)
Edited 24/Jun/2020 14:28:39 (7 months ago)
ok. I have Three characters. I will be posting a main thread for them soon, and it will be open, so. Name: Saotome Species: Pangoro Gender: Male Has a Scar over one eye. seems scary, but hes a nice guy. Always wears a white band on his left arm, Emblazoned with a Shadowy eye on a silver crescent. He has a deep sadness in his eye. Name: Takashi Species: Obstagoon Gender: Male Wears a Bandanna around his neck, featuring the same symbol. Always with Saotome, Takashi is an easygoing guy. He gets agressive when questioned about the symbol Name: Nightshade Species: Gengar Gender: Female A Scary seeming pokemon, she has Heterochromia, her right eye being Green rather than the usual red. she wears a ribbon made of scarlet lace, bearing the same symbol. She is often seen staring at shadows, and is Telepathic, like many ghost and psychic pokemon. Saotome and Takashi defer to her decisions Shared Trauma: These three were bonded far beyond a normal group of such different pokemon, when their trainer, Shade Darkwater, was taken from them. Now, they try to honor his memory by continuing his work: Helping Pokemon that have been exploited. These are the Members of Team Shade. They came to the area looking to improve themselves, as it is said to be goid for training, among other things.

a bibarel was sitting by a river dam, when suddenly, a wild giratina appeared, saying "I AM GIRATINA< LORD OF THE DAMNED!" the bibarel proceeded to destroy the nearby floodgate, then shouted "HA! Now you have no power here, as the river is no longer dammed!"... HAH!
Avatar "Toxic Ball" made by me. apologies for how bad it is, its just a placeholder.

Species: Baflammet Gender: Male Trainer: A human named Ivory, though he doesnt mention them alot. Appearance: Nothing special apart from a chip in his right horn Notable characteristics: He knows english seen in how hes always reading, and drinks an unhealthy amount of black coffee for a pokemon.
Hello! hope you all have a goodday, this is based on a description i made for fun-> Vulcan

👍 0
Posted 09/Aug/2020 17:18:01 (5 months ago)
Species: Gastly-Haunter Gender: Male --Wild Appearance: A Gastly that can interact with some inanimate objects. Notable characteristics: He's a jokester, and has haunter hands
Image taken from https://pokemon.fandom.com/wiki/Furret

👍 0
Posted 25/Sep/2020 21:49:44 (4 months ago)
Edited 29/Sep/2020 00:15:02 (3 months ago)
I've done roleplays on other sites, and these are the characters that I always use! Mirai Species: Shiny Alolan Ninetales Gender: Female Trainer -- Wild Appearance: She looks like a normal Alolan Ninetales, but just purple like the shiny ones. She's also smaller than average. Notable characteristics: Part long fur on the top of her head falls over her left eye. She tends to be very self-concious about being a Shiny pokemon as well, but is very energetic. Won't say no to a battle here and there! She's also the youngest out the four. Kenji/Shira Species: Absol Gender: Male Trainer -- Wild Appearance: A normal Absol, but he constantly glares at any Pokemon who tries to take advantage of Mirai's innocence or teases her about her coloring. Notable characteristics: The fringe of fur on the right side of his face covers half of his eye. He is pretty salty to be honest, and a Tsundere. It's pretty obvious he likes Mirai, at least to Youko and Kaiketsu, but he always fights with her so she obviously wouldn't think that. He also argues with Kaiketsu all the time. Youko Species: Sensu-style Oricorio (purple nectar/ghost type) Gender: Female Trainer -- Wild Appearance: Nothing special, unlike her friends. She can easily bleng in with a crowd. Notable characteristics: She wears a wisteria flower pin on the base of her fan-shaped feathers. She is pretty stoic, but really doesn't get any jokes. Like she has zero sense of humor, so she doesn't get when her friends start laughing for 'no reason'. She says some weird things, and can sometimes see spirits because of her strong sixth sense. Youko is usually the one to split up the arguments. Kaiketsu Species: Lucario Gender: Male Trainer -- Wild Appearance: It isn't very noticable at first glance, but the ends of his fur are slightly darker than the rest of it. Notable characteristics: He's the oldest of the four. Acts kind of like a 'parent' to them in a sense, even though he's only a year older. He's very protective of them. He is hot-headed and short tempered at times, but can also be calm and understanding. Probably the most reliable of the four. 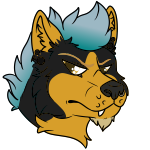 Species: Houndoom/Arcanine Cross (Much like real life dog breed crosses) Gender: Male Trainer -- (Not a fantastic bond though) Appearance: Houndooms body shape, fluffy Arcanine tail, little fluff on his chest, black body like Houndoom but an Arcanine orange where Houndooms usual white markings are. Head fluff too, that somewhat resembles a mohawk. All fluff is the same colour as Arcanine's fluff. Notable characteristics: Grumpy and malnourished, not the friendliest to be around to start with but once a bond has formed then he can calm down quite a lot. Other Notes: Doesn't have a very good bond with his trainer, he's been neglected and abused, trust doesn't come easy to him but he does just want someone who cares about him. Often runs away from his trainer but is found soon enough.
I hope this is suitable. I know he's considered a freak, that's the idea. :) More backstory will come of him as I use the character more and build up interactions.
JayJays SHOP <— Check it out! :D Saving for Shelter Pass X, PRMemory Stick, Shiny Charm Box & Shiny Charm 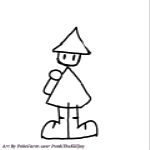 👍 0
Posted 02/Jan/2021 01:02:45 (26 days ago)
Edited 02/Jan/2021 01:03:30 (26 days ago)
Name: Gee or Juliet, responds to both Age: 18 Gender: Non Binary, Masc leaning Appearance: A 5'll male. He's androgynous with his body type, the signs of his masculinity being shown through his jawline and soft voice. Gee always dresses like it's winter, with a nice black scarf and his dark purple robe. His hair sinks down just past his shoulders, a messy black mess that matched his tired eyes Personality: A quiet and kind man, fairly meek. He always makes a effort to bond with pokemon, and loves bonding with them in whichever way he can, whether it was making them some curry or enjoying a nice battle. Other: he's a human dragon-type trainer, but loves any other type. He's always hunting for a Noivern or Noibat ((Feel free to PM me if you wanna rp! 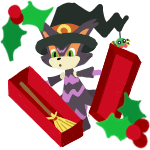 👍 0
Posted 13/Jan/2021 01:07:49 (15 days ago)
Name: Corin Species: Umbreon Gender: Male Trainer -- Wild Appearance: Corin is somewhat shy, always using red cap and a blue collar, carrying bag that is full of healing item, wears a tight black and white socks and wears dark gray scarf. Personality: Corin is shy and quiet, hates being near other pokemon and likes to be lonely. Get bored very easily.
Avatar made by ValleryP and PFQ Art team