Species: Buneary Gender: Female Trainer -- Appearance: Normal; brown fur with creamy fleece Notable characteristics: Dislikes curling her ears up, it feels uncomfortable for her, so they are both usually standing upright.

✲ art thread✲ dA✲tumblr✲ ✲ avatar by zan*
i might have edited it a little bit
✲ sig by frost✲ ✲ sig art & pixel (c) me✲ "Be our guest~!" 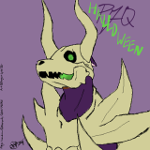 Species: Ninetails Gender: Male Trainer -- Wild Appearance: Overall a normal Ninetails, but with a scruffy coat. His eyes are green, and there is a long scar running from the left side of his forehead across his face ending under his right eye. Moves: Tackle; Toxic; Grudge; Will-O-Wisp Notable Characteristics: A.J. seems to constantly drift in and out of lucidity, sometimes he will sit for hours just staring into space and gives strange or incomprehensible answers to anyone who talks to him, while other times he is rather intelligent; often he'll complain about having a bad headache. He doesn't like to fight, and when asked for a reason, he usually either paws his scar or just walks away. When forced into a fight, he will attempt to run; if unable to escape, he prefers to chip away with status effects rather than an upfront battle. When asked about his scar, A.J. simply answers, "It's really better that you don't know." if he's not having one of his episodes of 'blankness.' His coat is unusually shabby for a Ninetails, and his eyes are green. He seems to know a lot about Team Rocket.

Sabura once belonged to a Kanto coordinator. Her trainer had found her as a Growlithe and immediately recognized her potential to be one of the most beautiful PokéMon in the region. Over the course of two years she was lovingly groomed for Contests all around Kanto and Jotoh, eventually being declared as 'Most Beautiful PokéMon' in both regions. But when she lost to Wallace's Milotic in Hoenn, things began to change. Sabura's trainer, who had so lovingly raised her, became angry and violent, pushing her harder and harder to become more poised and elegant than any other PokéMon they had ever faced in a Contest. After that he evolved her into an Arcanine, and instead of relying on her natural beauty, he began to heavily use accessories and cosmetics, even going so far as to start dying her fur. All of this she took in stride, as she wanted nothing more than to please her master, so that she might once again see the kind and caring person who had once raised her. That dream was smashed when they again faced off against Wallace and Milotic. Once again, they lost, and Wallace called her trainer out on his use of dyes and cosmetics, saying that he was completely missing the point of PokéMon contests in doing so. Her trainer became furious, and, instead of taking Wallace's words to heart, blamed his loss on Sabura, beating her for the first time, and without mercy. Sabura could take no more, and lashed out at her trainer, nearly tearing his arm off. As he lay screaming in agony, Sabura found her PokéBall and smashed it, leaving him there for others to find. Since then she has never trusted another human, for fear that she will be subjected to the same fate once again. However, she still does everything possible to maintain her beauty, as that has become second nature to her. She can be somewhat vain in regards to this, and will often become jealous around other female PokéMon if she feels they might be more beautiful than she is, leading to petty behavior on her part. But beyond all that she truly is like a lost puppy.

Disclaimer: Paladin is only going to be used when the RP needs reviving. He will not be involved in any RPs other than in the main thread to get things going. Species: Pidove Gender: Male Trainer: Wild Appearance: A red and black Pidove with black markings around solid white eyes. Moves: Wish; Teleport; Air Cutter; Close Combat Notable Characteristics: Imagine Deadpool if Deadpool were a White Mage.
Avatar made by me. Mega Houndoom © Nintendo/GAMEFREAK. Melanistic idea © PFQ
Check out my dex trading thread! 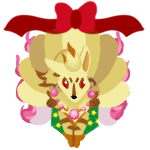 Shade was captured by humans as a young Ralts, and was the subject of an experiment into Pokemon Types. As a result, she became part Ghost instead of Fairy. She used her newfound powers to escape, and came away with a resentment towards humans. Since then, she travelled, eventually evolving into a Gardevoir through many fights with Trainers who wanted to capture her for her unusual colouring. She has now arrived in the Poképark, not knowing anything of this place...
Call me Shade! Species: Riolu Gender: Male Appearance: Shiny Riolu Notable characteristics: About a quarter weaker in his attack stats than a normal Riolu, mainly because his egg's shell was broken before he should have hatched.
Mood: I am lonely as heck
Tumblr DeviantArt Furvilla
This signature is a WIP my dudes

Species: Mawile Gender: Male -- Wild Appearance: A normal Mawile, except for his eyes being purple, rather than red. Moves: Play Rough, Fire Fang, Crunch, Sweet Scent. Notable characteristics: Has the Intimidate ability, raising the black jaw and grinning menacingly with it at the opponent. Carries a pouch around his shoulder, usually full of sweet Berries.

A bit of backstory why not

Axel was originally bred in a private Daycare, a wild Chansey mistook his egg for her own, and was carried back to her home in her pouch. At first surprised, the Chansey became his foster mother once he hatched. Axel is a carefree, naive Mawile. He's easy to trust other Pokémon, almost never being able to read their true intentions without blatant hints or past knowledge. He can be a little bit of a show off, but he truly cares for those he gets to know. He prefers not to fight, often using his Sweet Scent to try and calm aggressors, however he can and will defend himself and those he cares for, if in danger. 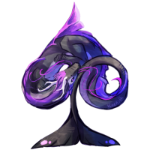 Species: Flygon Gender: Female Trainer: None. Wild Appearance: No one really knows what she actually looks like because she loves rolling around in paint. And mud. And other unidentified substances. Which makes her look really different every time she's seen (example of what she might look like below) Her name may be a clue, though Notable characteristics: ail has two layers of...uh...scales (I was too lazy to add this in the example sprite)? Also, all her stats are lower than usual once again because of unknown reasons.
Formerly DuskAurora. Avatar by Kaenith (Tumblr). Permission. Originally posted here.