👍 0
Posted 20/Oct/2016 00:58:11 (3 years ago)
I've got a mini-rant, hear me out. The userbase is mostly pretty cool and trustworthy and honest and all that jazz, and I would argue that those are the most important traits in a person. But still, let's face it, some users are not all that bright. You've got the ones who, for some unknown reason, couldn't spell "Niet" if their life depended on it. You've got people treating words like "Moderator," "Administrator," and "Staff" as if they're all the exact same thing. You don't consider watermelons, cantaloupe, and melons to be the exact same thing, do you? Same idea. Speaking of both of those, there are a surprising amount of times that I've seen people say "mods" when they mean "Niet." You know, they'll say things like, "That might be hard for the mods to code." The whole "hard to code" thing has been addressed and it's a crappy reason to say that a feature shouldn't be added. Anyway, the point is that the mods themselves aren't programming anything, at least not in terms of the entire site. PokéFarm Q is programmed by Niet. Period. (Or "full stop," but that sounds less dramatic.) And oh my gosh, the amount of times that I've seen, "I log in from my computer and my phone, don't ban me!" I've started messaging people politely telling them that different IPs won't get them banned because it needs to stop. It's annoying and it gives other new users the idea that logging in from different IPs is a "bannable" offense. Like, staff might contact you saying, "Hey, we noticed that according to where you logged in from, you went from Ohio to Australia and back to Ohio again in a two-hour time frame, you should probably change your password." But honestly, I don't know if they'd even really do that. So yeah. Be smart, people. :P

(The signature I'm referring to at this moment, since it's bound to change.) 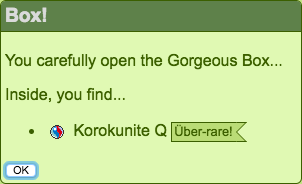 👍 0
Posted 24/Dec/2016 18:42:39 (3 years ago)
<rant>
So what's with users not using spaces and capitalization and all that? There is no such thing as a Boxbox or a Boxboxbox or GoldPoké and there's especially no such thing as PokéGold! Sigh… People…
</rant>