👍 0
Posted 29/Nov/2018 07:21:54 (1 year ago)
Edited 28/Jan/2019 02:25:55 (11 months ago)
THIS IS A CLOSED, ONE ON ONE POKEMON ROLEPLAY! PLEASE DO NOT POST OR JOIN, YOU WILL BE IGNORED AND/OR DELETED Kenna was woken up by the sunlight that was filtering between her blinds, landing on her face. She yawned, sitting up, practically booting her father's semi-stuck up Persian off of the foot of her bed. She frowned, wondering why the Persian always seemed to favor sleeping in her bed. Without a second thought, she slipped off of her bed and walked over to her closet: She needed to get ready for the day still, and she knew that she as going to get into trouble for starting her day so late as soon as she was spotted by her father. "You're up awfully late, don't you think?" The sudden voice from the darkest corner of her already semi-dark room made Kenna jump, but she knew that it was her friend Mewtwo. "I'm sorry, Mewtwo. I just slept through my alarm is all." "Seems to be happening a lot lately, are you sure you're alright?" Kenna stepped inside her closet, shutting the door behind her. Whether Mewtwo was 'only a Pokemon' or not, he was still very much a male and still very much in her room. "I'm fine, I promise." She claimed, through the door. "I've just been anxious for this day; the day where dad FINALLY lets me go out on my own, and start my own adventure!" Once she finished dressing herself in her signature light pink, long-sleeved shirt, black skirt, and white kitty hoodie, she stepped out of her closet with a hopeful glint in her eyes and a smile on her face. "You'll be coming with me, won't you, Mewtwo?" Mewtwo was quiet for a moment, his tail swishing back and forth. Finally, he let out a huff of breath. "Of course." With an almost triumphant smile on her face, Kenna grabbed her bag and slung it onto her right shoulder, before starting down the stairs into the kitchen with Mewtwo following behind her.
**Created by Syre, for my use only!!** 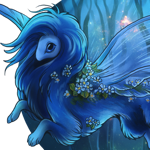 👍 0
Posted 29/Nov/2018 07:39:14 (1 year ago)
Edited 12/Dec/2018 05:28:14 (1 year ago)
A small girl in rose gold hair sniffed through the air looking for a meal. She was dressed in rags, torn jeans that were two sizes too big and a plaid shirt that had been mended so many times it was more patchwork than it's original cloth. She snuck into the yard of a neighbouring house smelling the pie in the windowsill. She licked her lips hungrily at the delicious oder that filled her nostrils. It was a rare occation that she slip out of the tall grass and into civilization but the aroma was so enticing she couldn't help but snatch it from the unsuspecting baker. She wuickly began shoveling handfuls of hot pie into her mouth barely swallowing before another fist full went in. 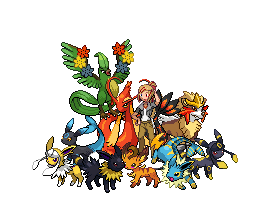 👍 0
Posted 29/Nov/2018 08:01:29 (1 year ago)
Kenna sat quietly, letting herself be belittled by her father and her older brother, Silver. Her father was yelling at her, telling her that she was going to be no good if she kept being as late as she had been for the past few days. Her brother Silver, he just kept saying how much of a better Pokemon trainer that he was going to be than she was, and he would challenge her regularly just to prove it. She finished her breakfast without saying a single word, and when she was finished, she got up and took care of her dishes. She told her brother and her father, who were still at the table, that she was leaving now. Mewtwo had followed her out of the house, and she had made sure to shut the door behind them once they were outside. "I don't get it, why let them speak to you that way?" Mewtwo asked. "Because there's no use, really. I thought you would have learned that, from all the observing you've done." She and Mewtwo had a small staring contest for at least ten seconds, before she sighed and resituated her bag on her shoulder. "Sorry, I know that sounded mean. But really, it's not worth it."

👍 0
Posted 30/Nov/2018 23:31:44 (1 year ago)
The small girl wiped her messy face as she heard someone enter the kitchen. She snuck into a nearby bush with the remainder of the pie as an old woman made her way to the windowsill. A little eevee walked over and licked the girls messy face before muching on some pie as well. The woman began yelling in her direction. "Hey you little brat, that's not yours! Give me back my pie! ***** NPC Syna Arabella *****

👍 0
Posted 01/Dec/2018 03:48:22 (1 year ago)
Mewtwo stared at Kenna, it was clear that he wasn't entirely sure what to think about what she had just said. There were a lot of things that he had used to think wasn't worth it, but his time with her had shown her otherwise. However, he decided that he just wasn't going to argue with her. A chill had suddenly forced its way down his spine, and he turned his head so that he was looking West from where he and Kenna were currently standing. Noticing Mewtwo's sudden aggitation, she stopped in her tracks and turned around to face him again. "..What is it, Mewtwo? What are you sensing?" She asked. "There's some sort of danger. In that direction." Kenna tilted her head to one side slightly. "Maybe we should go help, then?" She had suggested. But before Mewtwo could say anything in protest, she had already raced off in the direction that Mewtwo had indicated. Kenna had come across the scene of an older woman yelling at someone that seemed to be around her age, and it seemed to be over a pie. "Is everything alright over here?" Kenna asked. Immediately she had the older woman's yelling turn on her, and as she flinched slightly, she could feel Mewtwo reposition himself and his stance to being ready to jump in and defend her if needed. ****** KENNA MEWTWO ******

👍 0
Posted 01/Dec/2018 04:01:57 (1 year ago)
"That street rat stole my pie and is gobbling it up like a little piggie" Syna glanced back at the women through a gap in the bushes. The pie was gone now and the Eevee hopped over the girl and growled* at the woman while the girl tried to sneak away. While the woman continued to yell her husband ran infront of Syna cutting off her path. Syna let off a little growl just like the eevee had. *not the pkmn attack just a grrr hahaha

👍 0
Posted 01/Dec/2018 04:05:35 (1 year ago)
Kenna rolled her eyes at the other girl being called a street rat, and stopped herself from folding her arms across her chest or getting testy with the older woman. "What would it take to make it up to you? I could bake you a new one, or maybe give you some money for it?" She offered. She did have a little money on her, from the last sale she had made, but it wasn't much anymore.

👍 0
Posted 01/Dec/2018 05:19:49 (1 year ago)
"Please, it doesn't have to come to this." Kenna begged. But she knew that it was no good. Before she could say or do anything, as the Snorlax was going to use Pound on her, Mewtwo's eyes flashed bright blue and the Snorlax began to float in the air. The Snorlax was helpless in the air, the only thing it could do was flail. Mewtwo intended on holding the Snorlax there, until Kenna told him otherwise, not caring about the older woman screaming for him to put her Snorlax down.

👍 0
Posted 01/Dec/2018 05:38:42 (1 year ago)
Syna giggled seeing the large pokemon flopping about in the air no different than a magikarp. The man took the pokeball from his wife and recalled the Snorlax into it. With an angered look he gestured for the girls and their pokemon to get out of there before his wife could regain control of the situation. Syna grabbed Kenna's hand and lead her into the forest with Mewtwo and Eevee close behind. She looked around cautiously and quickly moved some branches aside. She walked the group down a short cave tunnel that opened into a wide valley of fusion pokemon. Upon seeing Syna the Eevee's family ran over. His parents were a Jolteon/ Umbreon and a Leafeon/ Raichu his sister was also an unevolved eevee but his older brother had evolved into a fusion of Jolteon and glaceon. Their father accidentally created an ice-thunger stone with his lightning strike and anxious to grow up the young pokemon ran to catch it right away. There were pokemon of every type in the valley all living in harmony. All rejected from the outside world. Syna spoke to the Eeveeloution fusions in their language and Mewtwo translated for Kenna to understand. "She's asking them about a pregnant Ninetails. She said she saved some pie for her in her... pocket." Syna smiled at the mewtwo and lead Kenna over to the ninetails assuring the pokemon that Kenna was her friend and she shouldn't be worried. Syna this time spoke to Kenna and Mewtwo directly in her thoughts. "She brought us hear hoping we would aid her with the birth of this Ninetails babies." He said with a somewhat surprised expression.