👍 0
Posted 10/Sep/2018 02:09:21 (1 year ago)
Edited 18/Feb/2020 04:20:19 (4 months ago)
Hello!
Please do not post here!
This is my attempt to do a journal
I had one back in the days with my love, but then everything changed when we went on a hiatus and our journal was deleted...
~ I'll make lists and whatnot and editing everything rapsodically and eventually post random pokés that I've got from hatching/trading/other. c: And other random stuff, too. Yeah. For 'important' things, look at that directory below... I will add a fancy template later... Directory * = I need to redo/make these >.>
Avatar is made by HotTubz ordered here. Collecting (mostly) missing and special

deltas for Trebor! Pm me, please~ <3 ~*~*~¤~*~*~
Don't want to fall behind with the new sprites? Sprite discovery thread~ and you can discuss them in the Sprite Discovery Discussion~ 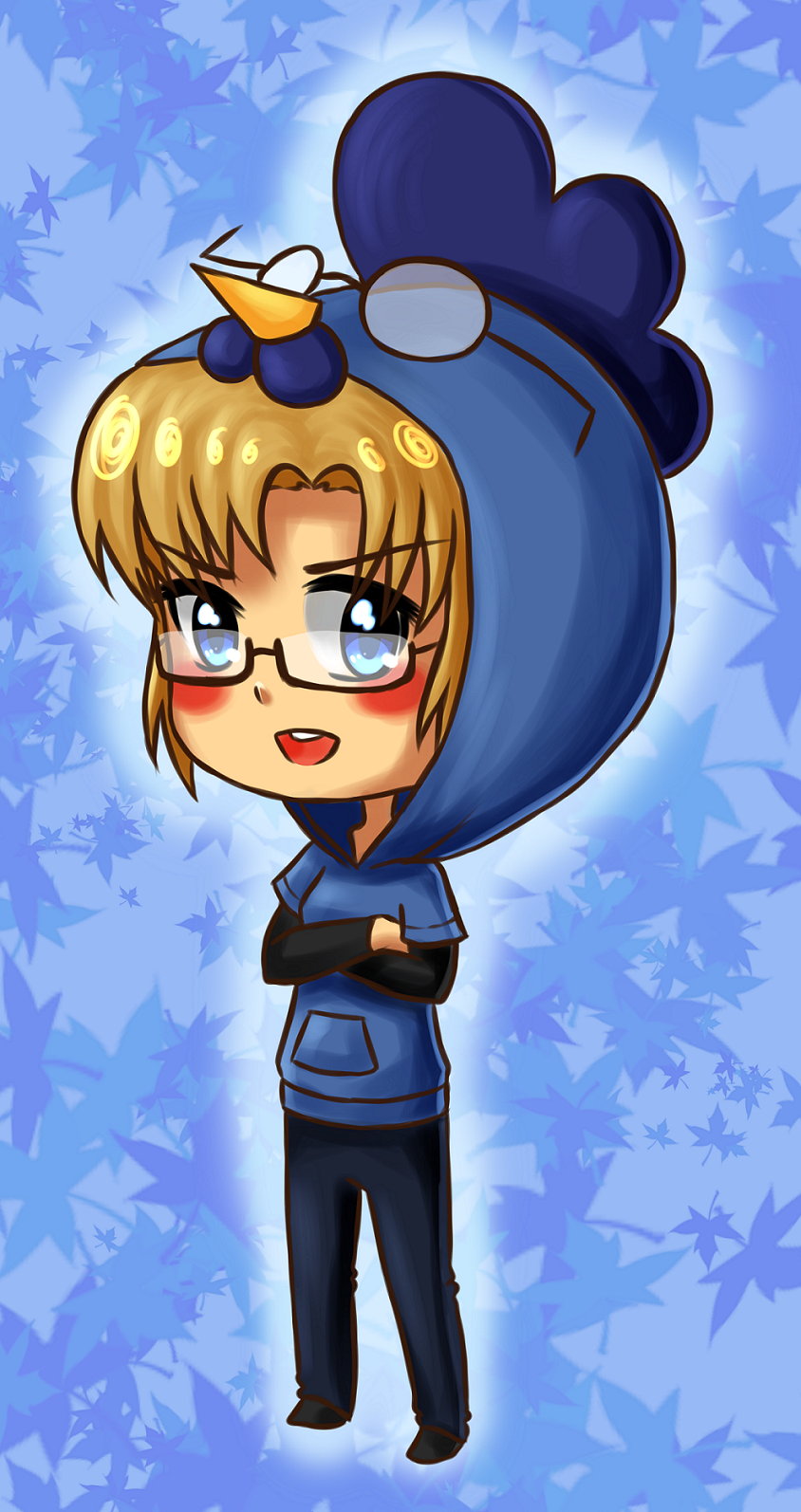 Pic made by my wonderfully amazing irl friend Inkydoc! Go check her out~
Hello~! So this should be some proper introduction of myself. Very well. I am the Crazy Blue Chicken™, a 26 years old gal from Hungary, . I am trying to find myself again recently, because somewhere in the last years I've lost my own self, which is made a big hole in my heart and made me really depressed. Now I am trying hard to find the light and pushing, to come out of it alive~ Wish me luck. :D Setting the depressing things aside, I am really into A:tla & LoK, Steven Universe, Harry Potter, Star Wars, She-Ra and Rick and Morty. I used to watch tons of animes, but things happened (mostly the awful last year of the University as a japanese major), and I've lost my fire towards them. But I really love the japanese culture and language, altought I am not very good at the latter, but I can say a thing or two in japanese ;) Recently I am into programming and coding, altought I still have to learn a lot, because I am self-tought and lacking some basics. I'd like to have a course soon and trying to get a job in this field. I enjoy reading
mostly books with fantasy and sci-fi theme
books and comics, watching series, playing videogames, role playing and sometimes writing and more rarely drawing, because I convienced myself that I am bad at these last two activities... I was on PF1 with the username Tune-chan, I had a fun time, until I was banned after some weeks because I was too good and suspicious XD I wrote a ticket and got back my account months later, and was very active back then (because clicking on PF was more comforting than studying to my exams XD), but then PFQ happened, and I was really salty to start everything all over again, so after PFQ opened, I went hiatus shortly after, because everything was not bad but really different. The farming was forgotten, until my Love started to play regularly again (she wasn't really active on PF1, but PFQ felt better for her :D), and first I clicked to get her some Mega Stones on the 10th Massclick Weekend back in 2015 May. It was the matter of time and I was playing again steadily. :D There were a little hiatus between 2018 jan/feb-2018 july because of anxiety, depression, and other delicious irl things, but I am back at it again, hoarding my precious delta fighting babs and starting fresh with my specials collection in a whole~ :D If we are at it, I love Fighting type pokés now with a passion, it started with the Machop-line back in the early 2000s. :D Machoke is my all time favourite fighting type, and was an odd one out of my favourite pokés: all of the others were fire and later dark types as well. With Hoenn, Torchic came and with him my everlasting love towards that little fire chick. I am actively hoarding them, and building a fire chick army >:3 I'll hunt them eventually, but I have to build up my credits pile first becuase I do not want to release them x'D I have a thing for dog-shaped pokés as well, such as Growlithe, Arcanine, Poochyena, Mightyena, Entei, Houndoom, Lillipup and newly Rockruff (and Kenyip, ohmysweetArceus, the Kenyip-line...!), but I like the Electrike-line, Absol, my favourite fairy godfather Snubbull and his bodyguard Granbull, the majestic Furfrou, and I like to include the Zorua-line here as well. I have other favourites that came with all the time I spent with playing pokemon roms and/or on PF1/PFQ, here is a little list of them all... Okay, not all, but come on. I like about 50-75 pokemon at minimum. XD

30 random PFQ habits of mine

I've always liked the pokemon natures Brave, Impish and Sassy (and Quiet), because I think I can identify myself with them. XD I have 3 'personalities' in my head: Tune, the original one, who is the Brave one of the brunch, a real gryffindor; Saku, the optimist and fun-loving, pranking 'Impish'-self; and the quiet, but rather sharped-tongued Sassy Natsu, who has all of the extreme moods and moodswings. (Note: I do not have personality disorder, this whole thing is just my headcanon (got it? haha), the by-product of my vivid fantasies :D) I like puns. I like pun-ishing people with my puntastic puns. I am not as good in english as in hungarian, but I am awful nonetheless. XD Music is my life's driving force, without music I can barely function (). I usually love Symphonic Metal and the whole Metal genre in general, but I regularly listen Rock music, too, and had a very serious J-rock/Visual Key period (Gackt was my god) in my life. :D Also listened some K-pop back in the days (I loved Shinee
RIP Jonghyun, you were and always be my favourite <333
with a passion, and I like a couple of songs of other boybands), and I have so many guilty pleasure pop songs. XD My newly found favourite is Steam Powered Giraffe, they were there when I was in the deepest depression and saved me countless of times with their cheerful, silly and fantastic music and performances~ A never thought I'll have a robot crush
especially that I am very lesbian
as the person of The Spine, and Bunny is a real inspiration! <333

Project: The Heart of the Lion

Project: I can be Anything You want me to be, baby~

👍 0
Posted 29/Sep/2018 15:33:17 (1 year ago)
Edited 29/Jun/2020 16:30:01 (15 days ago)
Delta Fighting Research Center ~Introductory post~ >>Insert wanted picture here<< >>Insert professor here<< Hello and please be welcomed in the Delta Fighting Research Center! I am >>professor name<< and I lead the research team of this facility. We are here to examine the behavior and habits of delta fighting pokémons. Tune was kind enough to set up our facilites on this farm, and she is a big help finding us new test subjects. The pokémons here are living a natural and well balanced life, and we do not running tests that are harmful for them in any ways. We just want to see how can they perform in various tasks. They are very playful and need lots of training and activities that can help them drain their plus energies! We have several training and playing fields and several gyms set up for their needs accompanied by various professionals. Here are our residents:

Our special residents' data sheet can be found here

Albino dexes I don't have

To be added to their place:

Melan Dexes I have

Shiny Dexes I don't have